erndale enjoys two names besides its own meaningful title- ”The Cream City” and ‘”The Victorian Viilage.” Ferndale is in Humboldt County in Northwestern California in the Redwood Country.

There is tradition associated with all three. Ferndale is the original name applied to the farm , which became the community, founded by Seth Louis Shaw in the spring of 1852. By autumn he had built himself a cabin at the foot of the Wildcat, and mid-winter found his crude home filled with adventurers who came across the Eel River Valley from Table Bluff to see what Shaw, and his artist brother, Stephen William, had found for themselves.

Like most of the original settlers, Shaw devoted his land to crops and orchards, but it soon became evident that the cleared land produced a lush, natural pasturage that made it ideally suited for dairying or cattle raising. The first settlers were principally men who had been drawn to California by the excitement of the Gold Rush, most from the northeastern Atlantic States or Nova Scotia. Others followed, many directly from Europe: Danes, Irish, Swiss, Italians, Germans and Portuguese. The 1879 census reported a population including: native born, 1,050; 90 from Denmark; 111 from Switzerland; 72 from Germany; 34 from Nova Scotia (Blue Noses); and 34 from elsewhere in Canada.

While the artist left, the farmer remained. His crops were successful and Ferndale came into being. Other homes within a short time began to appear. The original Shaw home is now owned by Mr. and Mrs. Frank Ford. It is a spectacular piece of architecture, completed around 186S. It sits serenely in the company of many other older homes- Victorian vintage types- thus, “Victorian Village.”

Ferndale and its vicinity was found to be ideal for dairying. Buttermaking was a major pursuit of the settler. Then came the creameries and an industrialized approach, fine dairy herds, good management. Thus,”The Cream City.” While Ferndale enjoys tradition, it approves and participates in progress. It is the gateway to a great Southwestern Humboldt County filled with landmarks, recreation, and good living.

In recent years, with the improvement of automobiles and highways, Ferndale has earned a reputation as an ideal “bedroom community.” It, too, has become an art colony, with its famous Art Festivai each May. Agriculture has its moment with the Humboldt County Fair each August. 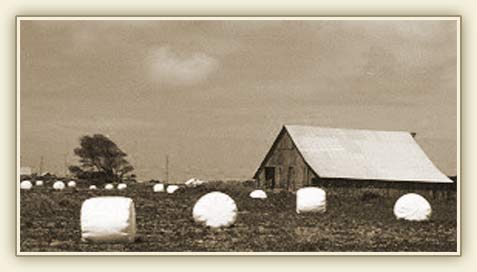 The dairy-farming Danes, arriving in the 1870s, brought practices from their homeland. Each small neighborhood of dairymen formed its own cooperative creamery. By 1890 there were eleven separate creameries operating in the immediate Ferndale area. Ferndale butter was considered the finest in the state, bringing premium prices in San Francisco. Ferndale acquired its first nickname, ‘Cream City.’

Shortly after 1900 many of the small creameries consolidated into larger creameries. The Central Creamery, located on north Main Street, became the mother plant of the Golden State Creamery, one of the largest in the state. (‘Challenge’ brand dairy products are from the remaining cooperative creamery, the Humboldt Creamery in Fernbridge.)

Ferndale’s pioneer creameries were responsible for a number of innovations in dairy processing and dairy management which helped revolutionize the dairy industry.

Dairying gave Ferndale a stable industry, but it was not the sole reason for the town’s growth and prosperity. During the last half of the 19th century, Ferndale became an important transportation center and the largest city in Humboldt County. It had its own port for sea-going vessels on the Salt River and was the terminus for stagecoach lines to the Bear River and Mattole regions to the south, with other daily stages going to Eureka and towns to the north and east.

The first farm produce shipped from Ferndale was hauled by wagon to Centerville Beach, four miles west, and from there transferred to vessels anchored offshore. Through the efforts of a pioneer settler, J.G. Kenyon, docks and warehouses were built at Port Kenyon, two miles northwest on the Salt River. The Eel River had proved navigable as early as 1850 when a schooner had mistakenly crossed the Eel River bar while searching for the entrance to Humboldt Bay. The vessel Whitelaw was commissioned to make regular runs between San Francisco and Ferndale. It was followed by other ships which made Ferndale a regular port of call, carrying mail, passengers and cargo.

For many years, stagecoaches from Ferndale offered the only access to the rich farmlands and dairy country of the Bear River and Mattole areas of the south. These stages often made part of their run along the sands of the beach, coming into Ferndale by way of Centerville, a dangerous route when tides were high. Stages were occasionally overturned and wrecked in the surf. 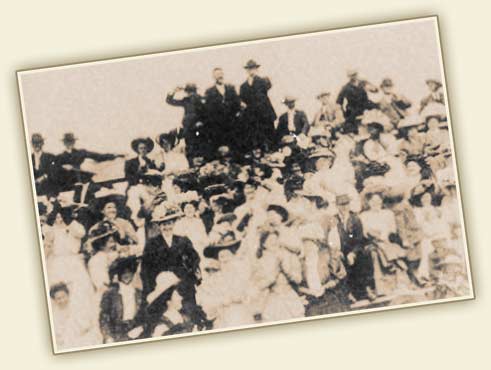 Isolated from the rest of the county, Ferndale developed an active social and cultural life of its own, much of it centered around its churches. Five church buildings, constructed prior to 1900, can be seen today. There were a number of fraternal organizations, local musical, dramatic, and literary societies, and several large public halls used for dances, local entertainments, and the presentations of traveling theatrical companies. (Still standing are the Masonic Hall, Odd Fellows Hall, Danish Hall and Roberts Hall, now called Portuguese Hall.) The town was justly proud of its volunteer fire department, which was adept at responding swiftly and putting out fires, and could be counted upon to appear in full dress uniform for almost every parade or civic function. Incorporated in 1893, Ferndale is the westernmost incorporated city in the continental United States.

A number of fine hotels and well-patronized saloons served the many travelers passing through town. Best known were the International, Ferndale (later called Ivanhoe), Pixley, Gilt-Edge and American. On the outskirts of town visitors found the notorious house of ill-repute, Strawberry Hill.

Like many rural towns of the late 19th century, Ferndale had its own racetrack on the northern edge of town. It was used for spirited local horse racing contests, fairs, and, on several occasions, was host to county agricultural exhibits. In 1897 it became the permanent home of the Humboldt County Fair, the longest uninterrupted county fair in California.

The substantial wealth which poured into Ferndale from its position as a dairy and trade center contributed to the building of many ornate store buildings, churches and elegant homes, called ‘Butterfat Palaces.’ The Victorian Village of Ferndale has been designated as a distinctive destination by the National Trust for Historic Preservation and, as one of America’s Prettiest Painted Places, it remains a photographer’s paradise.